She said Nigeria should activate Article 34(6) of the Protocol to the African Charter on Human and Peoples’ Rights, allowing citizens and NGOs direct access to the court in Arusha, Tanzania.

Article 34 (6) Declaration requires that State Parties to the Protocols make a separate declaration in order to allow direct access to individuals and NGOs to bring cases of human rights violations before the continental court for adjudication.

Judge Anukam stated this during her remarks as Chairman at the maiden Freedom of Information (FOI), Awards ceremony which was held on Friday in Abuja. The event which marked the 10th year anniversary of the existence of the FOI Act in Nigeria coincided with this year’s celebration of the International Human Rights Days.

“While it is true that we perform our functions within the framework of the African Court principally through the adjudication of human rights cases and rendering of judicial decisions, it is also indisputable that the enjoyment of human rights, including the right to information, will be better enhanced when people are aware of their rights and can exercise them. Events such as this are therefore doubly important for me because they serve to acknowledge and honour the efforts of those who are making or have contributed to making the right to information meaningful. 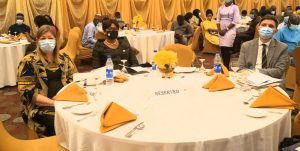 “As I understand it, some of those being honoured have earned recognition because of different roles that they played to ensure the codification of the right of access to information in the form of the FOI Act or by their efforts in ensuring the effective implementation of this instrument that guarantees the right to information.

“I see these as being consistent with my engagement and interest in ensuring that people are able to exercise and enjoy the rights that are guaranteed in key human rights instruments applicable on the African continent, including the right of access to information for which the African Court has established a robust jurisprudence”, she said.

The FOI Act, according to her, is also particularly close to her heart because of her personal interest and belief in the right of people to access information that enables them to make informed decisions on various issues affecting their lives.

“But as some of you may also be aware, before my current appointment, I served as the Head of the Freedom of Information Unit at the Federal Ministry of Justice, which is actually the engine room for the implementation of the Act in Nigeria.

“In that role, I was privileged to see the implementation challenges confronting the FOI Act as well as to see its many benefits to the society and the country as a whole, both for duty bearers, that is the government and its officials and institutions, as well to the rights holders, namely the citizens”, she added.

Justice Anukam expressed her gratitude to the organizers for inviting her to chair the gathering of distinguished Nigerians from diverse fields of endeavour united by a common interest on the issue of public access to information.

“As we celebrate today and reflect on the journey that resulted in the passage of the FOI Act in 2011 and the 10 years of its implementation, we should also take the opportunity to examine some of the implementation challenges that have continued to impede the effectiveness of the Law and the full enjoyment of the right to information by Nigerians.

“We should therefore see today as a milestone in the journey to create an enlightened and informed society and think of the steps that we still need to take to get to our desired destination. I want to congratulate all the awardees and honorees and urge them to see this recognition of their efforts so far as a call on them to do more to ensure the full realization of their vision of a country where citizens have access to information held by the government and public institutions”, she stressed.

The event was convened by the Media Rights Agenda and the International Press Centre (IPC) with support from the European Union (EU) to honour some persons and organisations who made various contributions to the emergence of the Act or are playing significant roles in making the exercise and enjoyment of the right to information meaningful for Nigerians, through the different roles they are playing in applying the Law and ensuring its implementation.

The corporate awardees include the Nigerian Union of Journalists (NUJ), the Nigeria Guild of Editors (NGE), the Newspaper Proprietors Association of Nigeria (NPAN), the International Centre of Investigative Reporting (ICIR), among others.

Newspaper is your news, entertainment, music fashion website. We provide you with the latest breaking news and videos straight from the entertainment industry.